Bingo On The Box Bonus 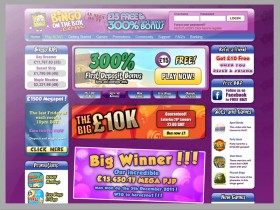 There are a number of different bingo bonuses offered at the bingoonthebox website including a no deposit bonus, that doesn’t require any prior play or commitment to the online bingo hall, as well as a first time deposit bonus that can only be claimed the very first time a new bingo player makes a deposit at the site, and then redeposit bonuses that are offered periodically to encourage loyalty at the Bingo Site.

All of these bonus types are pretty common at online bingo sites however; the terms and bonus amounts vary.

The first bonus available to new BingoontheBox players used to be a free no deposit bonus of £15. Bingo players didn’t need to make any commitment outside of signing up for a player account and trying out a few free bingo games to claim this bonus. This has now changed to a £40 bonus when you deposit £10. Although it’s not free it’s still a really competitive offer out there today.

The bingo site gives this money away as a marketing tool to convince players to try out the bingo rooms they have to offer. There’s no obligation and no credit card required. Players will need to verify their email address after they sign up, and there will be wagering requirements that have to be met before players cash-out any winnings from free monies.

New bingo players at BingoontheBox can claim a first deposit bonus of up to £150 in Bingo Bucks. The best way to take advantage of this offer is to make an £20 deposit, which the company will then triple in bingo bucks that players can use to buy bingo cards at the site. Make sure you claim this within 7 days of signing up.

During every game of 90 ball bingo at Bingo on the Box players have three chances to win. The first opportunity for prize money happens when a player achieves a bingo with one horizontal line on their bingo card. The next payout is won when a player makes two horizontal lines on their ticket, and then finally, a prize is paid when a player gets a full house (meaning they’ve matched all of their numbers). The same player can just one, two, or all three prizes during any one game.

90 Ball Bingo is available for play at 5 pence per ticket up to 50 pence each.

This form of bingo is the most popular form of bingo played in The United States. In a land based bingo game, the player generally wins when she’s made any one of the ‘7-ways-to-win’ in bingo. Online however, things are a bit spicier and there’s often a specific winning pattern that players shoot for to win a prize. That adds to the variety of the game and keeps things interesting.

Buy One Get One Free Mondays

Bingo on the Box features BOGO bingo deals every Monday in every bingo room. The BOGO action kicks off daily at 12pm and runs through midnight. For every one bingo ticket purchased, players will receive another bingo ticket for free.

Every Friday at the site players are treated to free bingo cards from noon till midnight. This promotion is available in both the UK and US style bingo rooms, and the games pay real guaranteed cash bingo jackpots.

If you have one number, two numbers, or even three numbers to go to hit bingo, on Sunday’s during Super Sunday Consolation games, you still win a bingo bonus! It’s not the jackpot, but it’s not a kick in the pants either.

The website offers a vast selection of side games, which they generally refer to as mini games available to players. These games can be played while the player enjoys a game of bingo, or separately. A couple of popular titles include:

Half the fun in playing bingo is in winning money when your card or ticket hits and you get paid, the other half of the fun that comes from this game comes from playing it with bingo roomies, making chat friends from around the world, and rooting for each other while you play exciting chat games for bingo bonuses. The Box promises bingo players a good natter in their fully hosted chat rooms.

Chat hosts will entertain bingo players with fun side games while everyone talks about what’s new in their lives, with their children, and in the world of bingo!

The site features a progressive jackpot that starts out at £1000 in the Day Dreamer bingo room. Every time anyone buys a bingo ticket, the jackpot grows until it is finally won. The jackpot’s won when someone hits a full house within 40 numbers or less. This style of progressive jackpot is what makes UK bingo more popular than US Bingo online, because in 75 ball bingo rooms you only get a shot at the progressive every hour or so, whereas in The UK’s 90 ball bingo rooms, you get a shot at the jackpot every single game.

The Sunset Strip room also features a progressive jackpot which kicks off at £500. The Maple Meadow room jackpot starts out at C$750, paying in either Canadian or American currency.

Having used this bingo site, I was delighted to be able to pick up their initial offer of £15 completely free. When you enter the bingo rooms, everyone is there to win money and have some fun. I have to say it was a pleasant experience and I site I now use regularly. I don’t normally leave comments but I think this bingo site really deserved it.

Overall I’ve had a very positive time using this website. The bonus is great and one that has allowed me to win some real money. The monday buy one get one free is super fun 🙂

Must say I enjoy this website lots, well only when I win. lol

I’ve been on this site quite a few times, I really like the side games they have and the 300% bonus was a great way to start off. The CMs on here are quite good but I’m on other sites that are a little better. You can play on here for 1p.