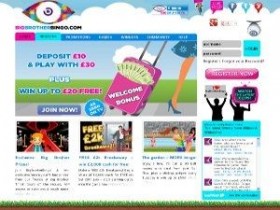 During your first 4 days as a bingo site member at Big Brother Bingo you have the chance to play the free Stairway to Swag game when you can win as much as £20 FREE to play bingo with.

Players don’t need to make any financial commitments to play this game, just click on any link on this page, and sign up for a new bingo account, then, follow the steps we’ll outline for you below:

Once you’ve finished playing, you’ll find out how much you’ve won. Here’s a tip, there aren’t a lot of people that lose the Stairway to Swag Game, so remember it’s only available during your first four days as a BigBrotherBingo member.

The minimum 10p and maximum prize amount is £5 bonus funds.

Real money bingo players will receive a 200% deposit bonus on their first deposit. The minimum deposit is really low at Big Brother too, so to qualify, you only need to deposit £5, which would get you £10 free. If you wanted to max out the bonus offer, you’d deposit £100, and receive £200 free for a total of £300 in bingo money.

Be aware though that this isn’t free money, it’s free BINGO money. Before you can cash-out any bonus money you need to wager it at least twice. So if you get £200 in bonus money and you made a £100 deposit, you need to do a bit of winning and gamble at least £600 (bonus+deposit*2) before you cash out. Your money is your money on the other hand, and can be withdrawn at any time; however, if you do withdraw the money that you deposited to earn the bonus monies, it’s only fair that either all or part of that bonus money will be forfeited.

There are three different varieties available on this site including the most popular versions of the game from around the world.

75 Ball Bingo is known also as American Bingo as it’s the most popular variety of the game in land based bingo halls in the United States. Generally, the game is played on pages that have 6 different bingo cards on each page. Online however, you can choose to play one bingo card, or as many as the site will allow you to buy.

Each card has 25 bingo numbers on it, including one free space that’s located in the center of the card. The goal is always to be the first to daub out the pattern that has been specified for each particular game. In land based casinos that’s commonly one of the popular ‘7 ways to win’. Since there’s more flexibility online, and everyone is using a machine, so no one’s frantically daubing on paper hoping not to miss a number, there are a plethora of patterns created by bingo sites like this one to entertain players.

Just like 75 Ball Bingo is the most common bingo game in the United States, 90 Ball bingo is most commonly played In the UK. It’s hard to say which is more popular online, but the fun part is that no matter which country you’re hailing from, you can switch up your game and visit either bingo room.

In this game, players buy bingo tickets, and then they race to make a 1 line bingo, then a 2 line bingo, and then finally a Full House which the Americans would call a Blackout.

In Sweden the most popular style of bingo is 5 Line Bingo, which is also commonly called Swedish Bing. This is the game for bingo players that miss tee-up and other speed bingo games as it’s known to be a very fast paced bingo game.

The goal in Swedish 5 line bingo games is to be the first player to cover your lines. Players with 1,2,3,4 or 5 lines covered, win! The game is very similar to American Bingo, however, it’s more like a 90 ball bingo game with no free square, and a kick in the ass to get things moving faster.

Looking for a little something more than roomies to chat with and chat games to play to occupy your time and your mind between bingo games? BigBrother Bingo offers both slot games and scratch cards to entertain players.

Scratch cards are just like scratch cards that you would hold in your hand and use a coin to scratch off, except that there’s no mess to clean up on your desk when you’re finished, and you don’t have to drive all the way to a place that sells them! Big Brother features 5 scratch card games to choose from.

Slot Machines on this site

The website features 9 online slots games for bingo players to choose from. Bingo players can play slot games during breaks from the bingo game, or right alongside their bingo card.

Safety and Security on the Site

Bingo players can have confidence in the fact that BigBrotherBingo.com is a legally operating online bingo site as licensed by the Government of Gibraltar. The bingo company is licensed under a license issued through Cassava Enterprises.

Player Reviews of the Site

"Really easy game play and love the cms . Mightn’t always be the busiest website but there’s decent money to be won for the number of players on there."
Alison Smith, United Kingdom